Documentary photography is one of the areas of photography that reflects the events that took place in reality. The goals of this trend are: the creation of a photographic document that is evidence of true events, a document of a certain historical period, an appeal or a warning to contemporaries.

Until recently, such a concept did not exist in the professional environment of photographers. Now it is understood as a kind of photography that demonstrates events and phenomena of social significance. Such images are obtained by deep immersion in the subject of shooting.

The advent of documentary photography
The term itself was formed in the United States of America during the Great Depression. In the 1930s, a group of American government commissioned a group of photographers to take a series of photographs of rural life in the country. The goal was to depict the life of the impoverished rural population without the use of artistic techniques. It was then that the basic principles of this genre were formed, which are still used today. 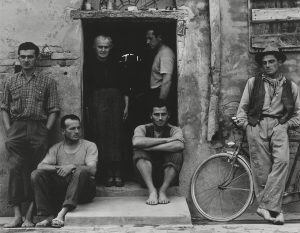 The bulk of the work related to the classics of this direction was carried out after the invention and popularization of rangefinder and small 35 mm cameras. Professionals in the field of classic documentary photography are recognized: Henri Cartier-Bresson, Robert Frank, Eugene Smith, Harry Winogrand and William Eggleston.

Decrease in demand for documentary photography
After the Second World War ended, the direction faced certain difficulties. Almost all the masters of this trend, such as: Diane Arbus, Eugene Smith, Mary Ellen Mark, William Klein, at that time worked alone or moonlighted, providing plots for well-known illustrated magazines. Publishing houses sought to increase demand for their magazines. In connection with this, the informational focus of periodicals has changed; they were less interested in documentary photography and the specialists who worked in this direction.

Requests for provided photographs in the media have changed. They had to meet the following criteria: be topical, colorful and attract the attention of the public.

Documentary photography today
At present, publishers are interested in including plots and stories on various topics in their magazines, they do not want detailed reports replete with photographs. In this regard, the niche of documentary photography was occupied by photojournalism. The works of specialists in this area are now most often found in galleries, museums, in books, photo albums. In periodicals, such pictures are rare.